From Mørdrup to Queensland and Sydney, Australia 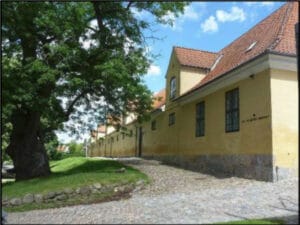 The Husars barracks at Hørsholm, originally farm buildings of Hørsholm Slot, and later used as the Danish Hunting & Forestry Museum (closed in 2017)

It was always known in the family that great-great grandparents, Anne Cathrine Sørensen, from Haderslev and Frederick Ferdinand Petersen, from København, met on board the ship “Humboldt” in 1872 bound for a new life together in Queensland, Australia. Although Aboriginals had been in Australia for over 50,000 years, white settlement in Australia only started in 1788, so the country was grateful for young, energetic pioneers. The newspaper from 1872 said “Immigrants [from the Humboldt] appear, judging by their names, to be principally Scandinavians, and past experience teaches us that this nationality furnishes [provides], as a rule, a very useful class of colonist”. To come to a country which was very “young” with untamed land, limited infrastructure and only English, was no simple move.

However, there was no knowledge in the family about Mørdrup or its connections to Queensland and Sydney. A clue came in 1992 that F.F. Petersen’s mother was Marie Nielsine Mørdrup (often known as Nielsine), born 1826 in Vangede. The family established that indeed her father was Niels Jørgensen Mørdrup, taking the name “Mørdrup” when he became a soldier in the Husars. Niels was born in Mørdrup in 1799, the son of Jørgen Bondesen and Frederikke Larsdatter, who together had six children. One can follow Niels through the Lægdsruller until he joins the Husars in 1822, 3rd squadron. His father, Jørgen Bondesen, was born in Mørdrup in 1766, the son of Bonde Joensen and Kirsten Jørgensdatter, also a local Mørdrup woman. Kirsten, born 1730, was the daughter of Jørgen Pedersen Ratterup (born 1696 Ratterup) and Kirsten Frandsdatter (born 1699 Bidstrup). 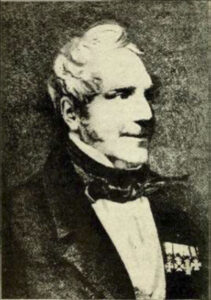 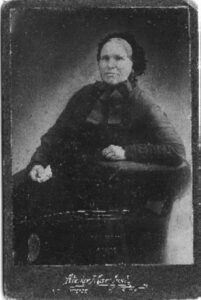 Niels Jørgensen Mørdrup was a corporal and student of gymnastics in the Husars stationed at the Gymnastik Institut at Hørsholm. (Originally part of the farm buildings of Hørsholm Slot, this building still stands, and was the Danish Hunting and Forestry Museum until 2017.) You may be wondering about the relevance of gymnastics to warfare. The connection had started around the turn of the 19th century, when Mr Franz Nachtegall in København devised a program for school students’ physical education. (In February 1804, King Christian VII appointed him Professor of
Gymnastics at the University of København). After the Battle of København, when the British landed at Vedbæk on 16 August 1807, Nachtegall saw the value of gymnastics for the soldier, and with the King’s blessing and agreement from military officials, he adapted the program and taught gymnastics to many officers and trainers in the naval academy (Sekadet-Akademi), the military academy (Landkadet-Akademi), as well as the Kgl. Artillerikadet-Institut thereby training the men who were to become Danish and Norwegian officers on land and sea. These men then trained their own non-commissioned officers such as Corporal Niels Jørgensen Mørdrup.

Niels enrolled at the Hørsholm Gymnastics Institute 1 November 1823 and graduated July 1825, with a record of “excellent character and outstanding grade”. One of the four examiners at Niels’
graduation exam was none other than Director Nachtegall. Due to his exemplary results, Niels was awarded an engraved prize saber. After graduating from the Gymnastik Institut, Niels served at the training school at Jægersborg. As a 27-year old, Niels was a corporal and teacher of gymnastics at the time he The Husars barracks at Hørsholm, originally farm buildings of Hørsholm Slot, and later used as the Danish Hunting & Forestry Museum (closed in 2017) Franz Nachtegall fathered an illegitimate child, Marie Nielsine Mørdrup in 1826. He married six months later, permission granted by his Major. Together with his wife, Niels would father an additional four daughters and one son while serving with the Husars in Hillerød. Yet it is through the marriage of his eldest daughter, Nielsine Mørdrup to Jens Petersen, that a son, Frederick Ferdinand Petersen, was born in 1849, and who would travel to Australia on a three-month, often treacherous sea-voyage in 1872. 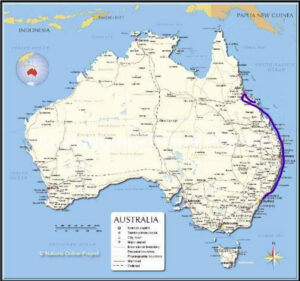 From Bowen to Townsville to Ravenswood & 2000 km south to Sydney

Corporal Niels Jørgensen Mørdrup continued to serve in the Husars until at least the 1840 census, but from the 1845 census on, he was listed as a “retired corporal”, still living in Hillerød. In his final census listing of 1870 shortly before his death, Niels was a fisherman. Probate in June 1870 stated he was living on charity and owned nothing. So two years later, in 1872, Niels’ grandson, Frederick Ferdinand Petersen arrived in Bowen, Queensland (a small town of about 800 people on the coast). Immediately heading 200 km north, they chose a larger town, Townsville, to settle
in. However, life was tough so they chose to follow the construction of the new western railway from Townsville to Charters Towers in very difficult countryside. Railway camps were established for the workers, and Frederick and Anne were the bakers at each new and remote campsite. Temperatures can reach 40 degrees in those areas, and it is no wonder that four young daughters died in the next 5 ½ years. Was this really the “Land of Opportunity”? Undeterred by personal tragedy, the couple established a successful business in that untamed area of Queensland (Ravenswood, a small gold-mining town), with Frederick also holding gold-mining leases.

In 1895, the family of Frederick, Anne and three sons moved south over 2,000 km to Sydney. Always with an eye for profit, Frederick built and owned a bakery and large store and held multiple properties in Sydney by the time he died in 1925. His final years were spent in Burwood, Sydney with his wife Anne Cathrine Sørensen in the large and luxurious house he designed. Apparently, the dining room could seat 40 people and there were many antiques, and of course, Royal Copenhagen porcelain. The house was often used to entertain Danish dignitaries and visiting politicians. Forever a proud Dane, Frederick’s house at Burwood was called “Dannebrog” and a large Danish flag was placed in tiles at the entrance. Another large Danish flag was displayed inside. Certainly, his grandfather, Niels Jørgensen Mørdrup, the man who died owning nothing and reliant on charity would have been pleased. 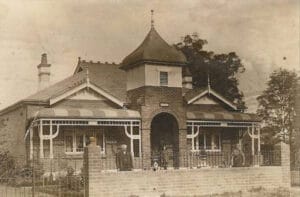 “Dannebrog”, the retirement house built by F.F. Petersen, Sydney, 1913 with Frederick & Anne Petersen standing at the front. Taken about 1918. 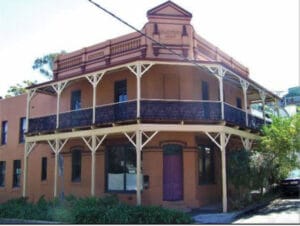